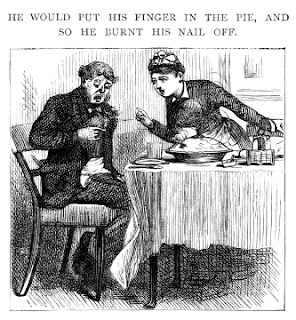 So, this is what you need for Osgood Pie... 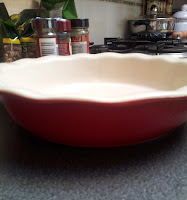 Osgood Pie is one of those recipes that has been around since
long before anyone can remember. And according to my research, some folks think it turns up most often in Texas cookbooks, but I haven't gone through a whole bunch of Texas cookbooks looking for it, so I'm just spreading folklore here. Speaking of folklore, the Osgood Pie could have got its unusual name three ways: 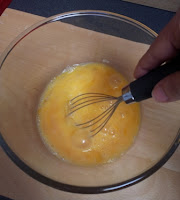 1. from folks exclaiming Oh So Good after eating a piece
of the pie!
2. from the name of the cook who invented it
3. from the place where it is thought to have originated -
the Ozarks.
If you believe number one, I reckon you'll believe anything, and backing me up in this is pie officionado Nancie McDermott, who thinks this is just an urban myth.
If you subscribe to number two, we're getting somewhere, but what are the chances of tracking down the Mr or Mrs Osgood who first thought of putting pecans and raisins in the same pie.
In fact, Mrs Roberts' pie departs from the usual Osgood Pie in one rather peculiar way... all other Osgood Pie recipies I have looked at have vinegar as an ingredient - and indeed, some folks think Osgood Pie evolved from Vinegar Pie. But Mrs Roberts' pie uses grape juice - sweeter, eh? Now, if you wish to bake your pie with vinegar, find that recipe and go right ahead, however, I'll be baking Mrs Roberts' Cheyenne version because I have no doubt that this is the version that was waiting for Sheriff Cliff Ryan on his kitchen table, along with the prune cake, doughnuts, venison stew and bread pudding, and all the other treats prepared for him by grateful townsfolk of Cheyenne.
A small point: the raisins seem to be contentious (bit like the prunes). I myself as a child pulled raisins and sultanas out of anything they happened to be in (I try to be more mature about such things these days)... and from what I've read that's precisely what has happened with other child consumers of the Osgood. Having said that, I'll be including the raisins in my Osgood Pie because you surely can't have an Osgood Pie without them, even if the colour of them - golden or dark - depends where or from whom you get your recipe.
Origin version three may or may not be correct. What it does serve to illustrate is the wide migration of food across the United States. Pioneers and settlers brought their recipes with them from home. We often talk about people migration, or even animal migration, but food migration is another altogether too fascinating category of the human journey and evolution!
So much about food these days is 'fusion' and what's fashionable. But the fact that a recipe such as Osgood Pie is still gracing tables across North America at times of celebration and commemoration, Thanksgiving for example, demonstrates that people aren't about to let go of what has made them feel warm, cosy and comfortable for generations. Heritage is still important when it comes to food.
So if Osgood Pie did orgininate in the Ozarks, more power to it... look where it is today! 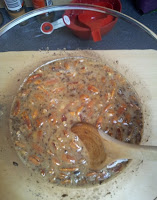 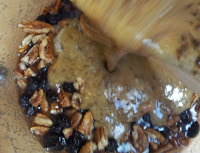 The ingredients all come together easily; once this is done, pour into an unbaked pie shell. Bake at 400F/200C 'to start', but then lower the temperature to 375F/190C - 350F/180C. My oven is quite a 'hot' (fierce-ish) oven, so I am baking at 350F/180C. And I'm assuming that 'to start' would include preheating the oven to 400 F/ 200C, so I have done that. In non-numerical terms, that's start with a quick oven and reduce to a moderate oven. I assume that starting with a quick oven is to brown the pastry (which you will recall is unbaked); from my research, I'm going to allow about ten minutes for this part; then bake at the moderate temp for the rest of the baking time.


Back in the day in Cheyenne, it's likely that Cliff's Osgood Pie was cooked in a quick oven and then likely the oven door was opened for a bit to reduce the oven temp. 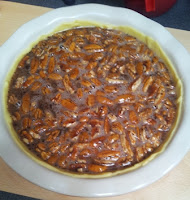 But for the experienced cook who knew her oven there were undoubtedly other ways. At this point, I just want to acknowledge this excellent information on how to cook pies in a woodburning cookstove provided by Jim on his terrific blog: http://woodcookstovecooking.blogspot.com.au/ 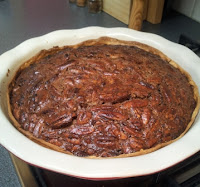 Mrs Roberts instructs that the Osgood Pie is cooked when the center is just firm, and warns against overbaking it.

Because the recipe doesn't specify exact cooking times,
you need to keep an eye on it.

There is a delicate spicey fragrance as this pie bakes.
The flavor is delicious, although quite sweet.

For a first time effort at making the Osgood, and considering my pie-making skills and experience are almost negligible, I didn't do too bad. My apologies to all those who can make this pie in their sleep! After all, it's all about the journey, right? 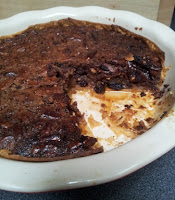 And there is always that thought hovering, taking me back to another era to reflect upon how this sweet and scrumptious pie would have been received and enjoyed on a difficult day when the comforting generosity of appreciative neighbors and townsfolk was most welcome.

In spite of it all, no one had any trouble devouring it (although I think a few of those raisins didn't quite  make it - and I may be one of the guilty ones).

Footnote: the red food coloring made it in; although I didn't use much for fear of baking a bright pink pie, it did give the mixture a rosy glow!