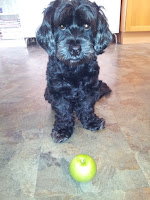 On the 27th of last month it was Henry Wadsworth Longfellow's birthday. In honour of that famous gentleman, who happens to be a literary hero of mine, Blackbird Pie presents for your culinary delight Longfellow's Wayside Inn Apple Pie. I do this with the help of my enthusiastic moodle, Coco Chanel, who it seems, unlike with most food, can be trusted with granny smith apples, and who was happy to provide the cuteness factor to this post about simple apple pie - or is it?


This recipe comes from Longfellow's Wayside Inn Cookbook, a cherished keepsake from my visit to the Inn. For this scrumptious, fragrant apple pie you need the following:


And so to the Longfellow's Wayside Inn method:

Place all ingredients in bowl and mix together.


Now that's not hard, right? And still I managed to savage my thumb with the knife while slicing the apples - the second one I might add, so basically the whole pie was made with an injured thumb. Enter the complication. I'm probably the world's most clumsy piemaker. That being said, my pies do taste very good. My pie adventure in pictures below, but I spared you the blood... shudder, urgh!